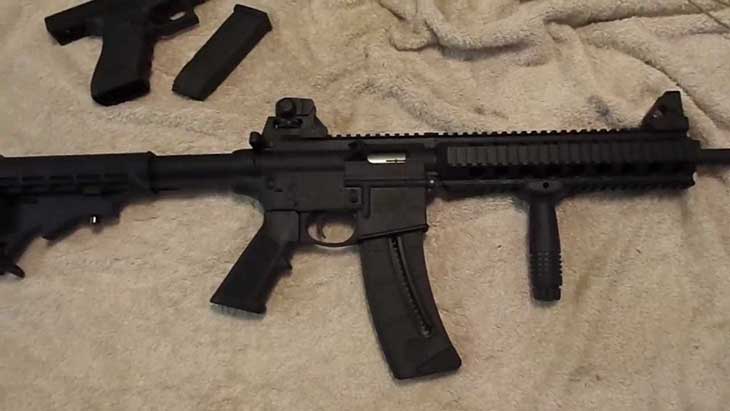 In this article we’re gonna go for red dots versus your iron sights on your rifle and we’ll see which one is the best choice for you.

This is my predominant practice rifle, I’ve been working this one for a while. Now I’ve got a few thousand rounds this with just iron sights and I’ve been focusing on my technique. I’m a big proponent of technique, technique is going to be superior over technology and things. The argument with a red dot of course is that, it’s so much faster at close distances and it’s more accurate at farther distances well,

It’s not an endorsement of Smith & Wesson, it’s just the fact that I got a rifle for $500 that I could beat the crap out of and do demos in front of students and also practice in my spare time . At 7 yards, this is typical room distance in your house if you think about that this could be a hallway engagement this could be a room engagement , so what we’re looking at here on this valor Ridge target is that we’re gonna look at his nice clean thing and there’s not a bullet hole on there.

I’ve got my timer, so we’re gonna see what the time difference is between an iron sighted rifle in this red dot one. I’m gonna utilize the same technique for both and I’m gonna show you the time after each shot as I said clean target. Let’s work proper technique here, so as you’re gonna see at all it starts with your stance, I’m a big proponent in that also starts with your buttstock placement, in your shoulder, if it’s different every time.

If you keep moving, you’re gonna be searching for it so keep that buttstock in the same part of your shoulder each and every time I don’t change this whether I’m running slick or running body armor, it doesn’t matter it stays the same for me.

Once again hand placement stays the same when I’m standing, it stays the same when I’m in a kneeling position and it would stay the same if I was in the prone position. I’m not getting down prone, I’ve been have my legs are tired anyway but it’s this stays the same so consistency guys . As I said that I’m gonna get some good shots into this guy at the 7-yard mark or you can even do this closer if we wanted to, the argument is that the red dot is faster up close , I don’t know, let’s see if that’s true or not. I’m gonna put this on the timer using consistent technique, I’m going to put these rounds right where they need to go and I’ll show you an example of each challenge position that was in point seven and I took my absolute time on doing that.

That’s right in the center of the spine boxes you can see that right there, so that’s in less than a second, I don’t know how much faster that you would want to do something in a home defense situation. If I did it again it would be just as fast if not faster I deliberately took my time on that one to make sure is dead center. Let’s see if we can pick that up same right there. Point seven four just a little bit quicker but not much so we’re talking three-quarters of a second, I can push that even faster if I just wanted to keep it in the circle but I want some good spine box hits.

Let’s check out the red dot. What I’ve got here is a red dot sight that’s the aim point t one. Everybody knows that’s my favorite red dot and I’m gonna see if there’s a difference. I’m gonna try to put it in the center of the spine box as well, so the red dot is on and as you can see my rear side has folded out of the way like I like it. I’m gonna use the red dot to see if there’s any different same technique. That’s a point eight and I took my time made sure is dead center, let me give you one more so that we can get an aggregate once again right on the money point eight.

So for me the technique is that the iron sights and the red dot are about the same in fact. I was a little bit quicker on my iron sights so not much of a difference, I don’t think a tenth of a second has anything to write home about and as you can cheat this target, these rounds are all dead center.

The spine box that’s nice and high on the spine box but every single one of them right in the middle of the spine box, these are good hits at 7 yards, if I move up to 5 yards this is gonna be even faster and that’s a typical room size engagement, so the other argument is that red dots can be a little bit more accurate at distance well.

Some guys shoot iron sights great at distance others shoot red dots better, it’s gonna be up to you but I’m gonna show you that you can get the job done with either one. I’m gonna just do a three round group here at 200 yards on the C’s own steel is what that is. So I’m gonna get in position get my natural point of aim and just do some good shots with this iron sighted rifle and it’ll be on the orange target. Shooting with the red dot on the sky-blue or for you guys out there that were born after the 1980s powder blue, so this target like I said not my best group. If you can see it’s right like you guys in California and Hawaii are like jumping up right now is in heck but that’s literally what we’re looking at. So just to give you a perspective that group is this big ,this is an example of a bad position gear won’t make up for a bad position whether you run an iron sights, red dots variable, power optic, it doesn’t matter.

So if you’re shooting and you have a bad position you can expect for it to string out like this. You wil see this is bad for me, if I have a group like that that’s bad so this target is from earlier today with the iron sights. When I shot those iron sights , I had a good locked in position, I had a good natural point of aim and that’s what you’re looking at right there, that’s the group that was being shot but this one that’s what I’m used to with a good position so as you can see the iron sights better than even the red dot was alright on this group much better. About this size group as you can see that’s what I’m used to shooting at this kind of distance and that’s a good position that felt much tighter for me. It felt like the sights were coming right back into recoil .

So just to iterate, it doesn’t matter what you’re running on your rifle, if you have proper technique proper mechanics proper fundamentals you’re gonna do good shooting regardless of what you’re using . It’s the technique as the old adage goes, it’s the India not the arrow.

I go over a lot of these concepts in my American Rifleman book and that’s available, I’ve got that in the description box below these crazy times, it’s always a good idea to know how to shoot your rifle.